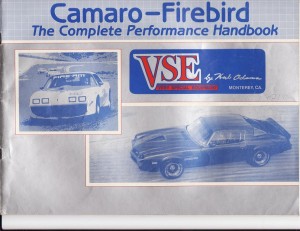 Almost anyone I am around more than once a week will tell you that I am Trans Am crazy.  Add in the fact that I love talking about them and you’ll see why everyone tells me about every second generation Trans Am they see.  When a new friend or stranger asks me about my Trans Am, it is usually accompanied with “what do they look like again?”.  It is then apparent that the person listening to me doesn’t have a clue and I calmly ask; do you remember Smokey and the Bandit?  Immediately a smile comes across their face and is followed by comments about speeding, beer, the funny sheriff or just “I remember now”, which is the most common reply to my question.  It has become very clear to me that almost 99% of the non-Trans Am population stereo types our cars with law breaking and all out spirited fun.  Except for occasional blast to 100mph from time to time, they are usually only right about the spirited fun.

I’m sure it’s also safe to say that on the other side of the spectrum Smokey and the Bandit stereo typed law-enforcement as slow bumbling fools.  For the sake of not offending the men in blue for whom I respect and have great appreciation for; I’ll just say in 1978 one Sheriff took great pride in dismissing that perception.  The method in which He went about it put the Trans Am in a whole new light for me.  His name was Sheriff J.D. Stewart of Catoosa County Georgia and he just happened to be a true blue Pontiac’r.  When most law enforcement departments were ordering big Ford and Chevy patrol cars, Sheriff Stewart called up Pontiac and ordered Trans Ams outfitted with the W72 performance package and WS6 suspension.

In the time of Bandit wanna be’s running up and down the highways of the country, this Sheriff figured the best way to catch someone was to have the best car on the road.  But, a Trans Am as a patrol car?

One day TAC regular Ken Allenback of Canada submitted two photo’s taken from a magazine.  I couldn’t believe my eyes when I saw the above pictures.  At first I had no idea about the article or that Trans Ams were even used in law enforcement.  In a day of ‘DARE’ and ‘Beat the Heat’ programs its common place to see a Trans Am or sports car outfitted with decals, lights and sirens.  But, just imagine what it must have been like seeing one of these intimidating cars in your review mirror.

At the start of the article the author describes the moment when he first saw a Catoosa County Trans Am.  I’m pretty sure this is what he saw. 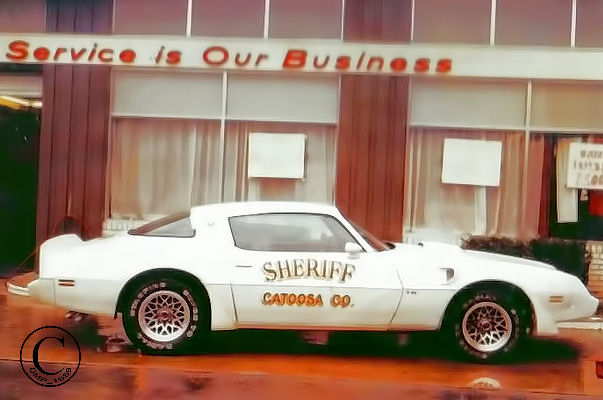 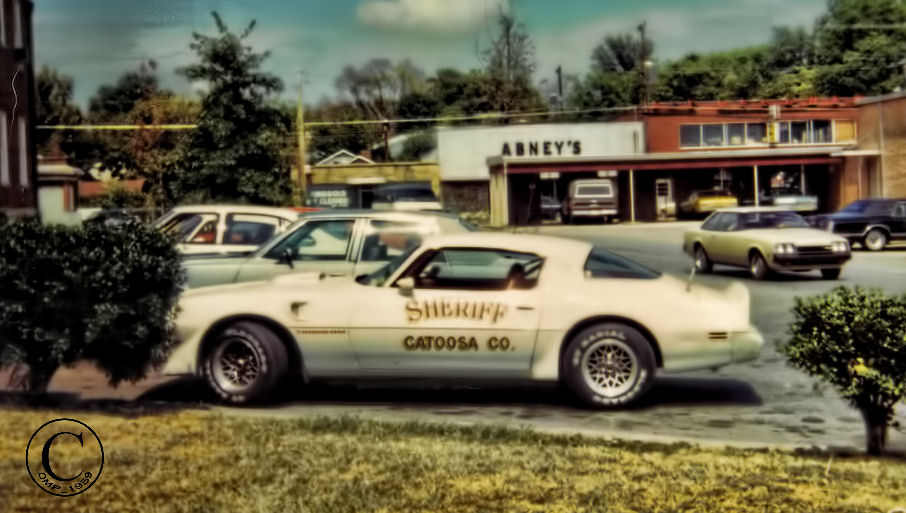 Thanks to Dennis Padgett for allowing TAC to use the two above images in this article.  He holds the copyright to both images and written consent must be obtained before use will be allowed.  Please click here to contact him for legal permission.

All of the Trans Ams used by the Catoosa County Sheriffs office were non-ac W72 400-4spds coupes without hood birds at a minimum.  They were all cameo white with carmine red standard interior.  I’ve read there were 6-8 ordered originally, which are the 78 year model obviously and followed up by 4 more in 79.  Pictured below were 8 plus 3 lemans.  From what I’ve been able to research the Sheriffs 78 was stolen at one point and totalled and another was wrecked. 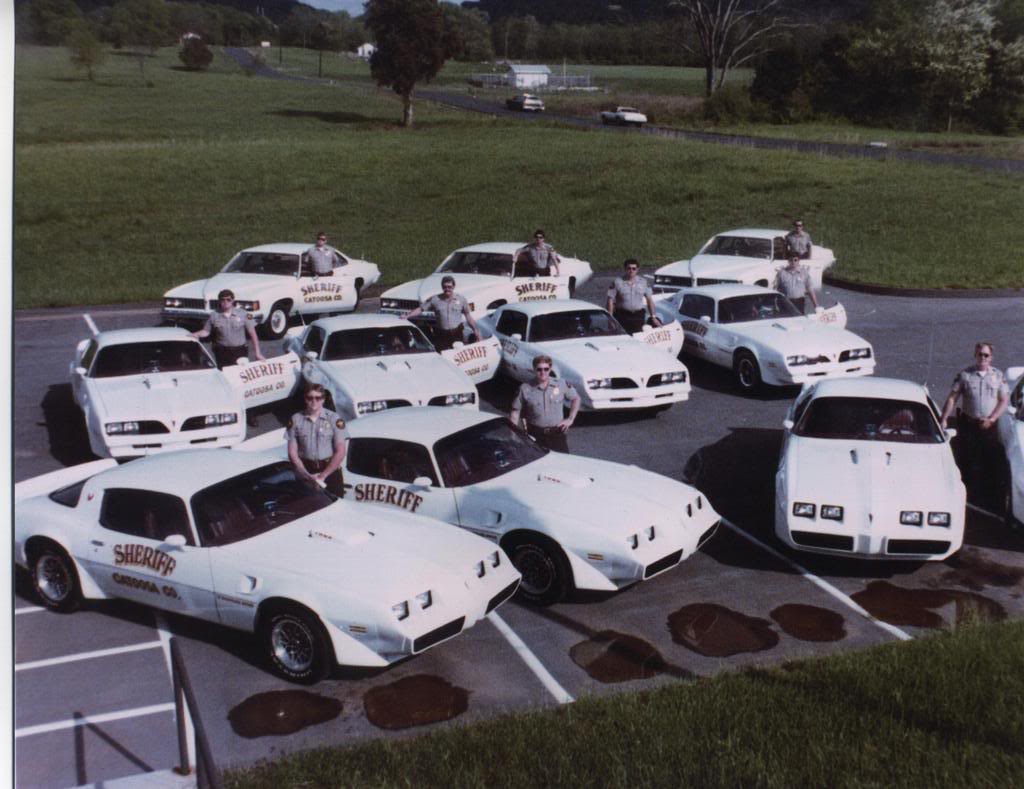 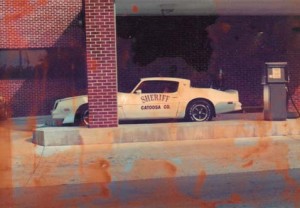 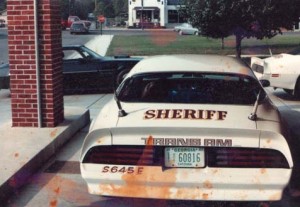 When the 79 models were ordered the only apparent change seems to be the addition of the WS6 wheels and I would assume 4wheel disc brakes. 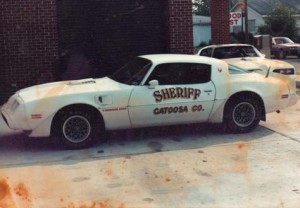 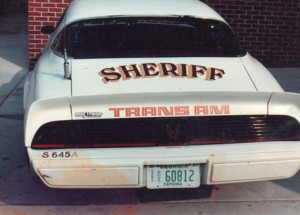 At the point where I’m writing this article these Trans Ams must have seen some action that required repairs, as the 78 pictured above appears to be wearing front wheel flares from a 79 model.  The 79 appears to have a fuel door from a 81 model.  Perhaps these items were lost in high speed pursuit.  Whatever the case these officers had style and took law enforcement to the next level.

Once these pieces of Trans Am folk lore were brought up the community as a whole came to one consensus.  We wanted to find one.  Sad to say that has never happened.  It was rumored that the Son of the late JD had his fathers 79 in his posession, but that has never been verified.  Sometime in 2010 a TAC member posted a craigslist link to a Trans Am that was supposedly a old catoosa county TA.  The ad was removed within hours and all chances of its verification and subsequent restore were lost once again.

That brings up another question.  When will someone clone a Catoosa County Sheriffs Trans Am?  To do it right wouldn’t be difficult, but up until recently the interior was a mystery.  Here is a picture I discovered along with many more that shows exactly how the interior would appear. 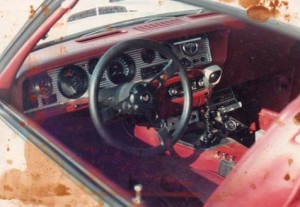 So there you have it.  A piece of Trans Am history is out there waiting to be discovered.  There were other law enforcement agencies that utilized Trans Ams, but none with such character and personality.  The reading of this article begs to challenge, what was more intimidating….the cars themselves or the men driving them.  They both commanded and received respect.

To the late Sheriff JD Stewart we tip our hats to you.  You will forever be remembered for your service and style. 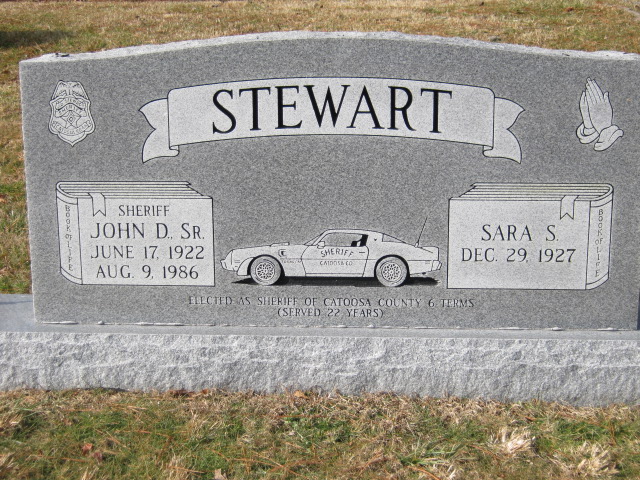 Special mention to www.kirbycarmichael.com where some of these irreplaceable pictures were found.